Very few cities are as polarizing as LA. Centered around Hollywood, people either love the glitz and glam or despise the fakeness of it all. Los Angeles comes with a lot of stereotypes, but one thing’s for sure, whether you love or hate the City of Angels, there are a number of once in a lifetime experiences you can only have there thanks to the film industry, their unique geographical location near the ocean, and a California culture that’s all their own.

CheapOAir has launched the first in the series of “Things to do” videos to help you plan your itinerary while you are in LA, which you can see here. I also have some fun reccs for a girlfriend getaway, couple’s retreat, or solo sojourn to Cali-forn-ia. So the next time you find yourself lost in La La Land, here’s how to make the most of a trip to Tinseltown.

Go on a Wine Safari

The place to sip and swirl Malibooze with your Mali-boos, Malibu Wine Safaris is an adults-only animal experience paired with local wines made on their 1,000-acre vineyard. You’ll ride around the massive property in an open-air safari vehicle meeting local celebrities like Stanley the Giraffe (who you may know from the Hangover 3) and other exotic creatures like Zebrina the Teenage Witch, Michelle O’Llama, and Justin Zeber as you gaze at the animals over unlimited wine pours. Fun fact: it’s also conveniently located next to the Bachelor mansion and they’ve filmed many a date there.

Give in to Pier Pressure

Santa Monica is one of the most accessible beaches from LAX so if you’re craving a beach day, you don’t have to wait long for good times and tan lines and to feel the salty ocean water on your skin. Lined with amusement rides and vendor stalls, hop on the Ferris Wheel and carousel for nostalgic fun and epic views, but if you’re more of a thrill seeker, they also have trapeze school to learn to fly through the air with the greatest of ease. The pier is also the very end of Route 66 so be sure to snap a photo at the iconic marker.

Celebrity spotting is a guilty pleasure of the LA lifestyle so if you’re keen on seeing stars there are certain spots around town that up the odds. Rodeo Drive is where all the haute shops are, the TCL Chinese Theatres is one of the top spots for red carpet movie premieres (and is just cool), while Chateau Marmont has been an A-list hideout for years. There are celebrity-owned restaurants and bars like the three Vanderpump Rules restaurants, SUR being the most famous, and Nobu, which is co-founded by Robert De Niro. And of course, if you just want to get your fill of Hollywood gossip, you can always do a Star Tour bus, which is one of the must-do LA experiences.

Did you even come to LA if you didn’t Instagram it? Hit up the Hollywood Sign, follow the stars along the Walk of Fame, visit the kitschy and wonderful Wax Museum, and see the other kind of stars at the free Griffith Observatory. LA also has several well-known mural walls from “California Dreaming” and “Made in LA” to the love wall full of graffiti hearts, the angel wing spots, and pink wall at Paul Smith.

Be in a Live Studio Audience

Did you know that many of your favorite TV shows offer tickets to their tapings? And that many are even FREE to attend?! Whether you prefer daytime or late-night talk shows, game shows, or reality TV, you could be part of the excitement. Some of the most coveted and hardest to come by tickets like Ellen, Jimmy Kimmel, Jeopardy, and the Price is Right require advanced reservations and sometimes even lotteries, while others, like the Voice just require you to show up early and wait in line. May the odds ever be in your favor.

For a real behind the scenes look at the silver screen, Warner Bros., Sony, Disney, Paramount, and Universal all offer behind-the-scenes backlot tours to see where and how that movie magic is made. You can take photos with your favorite props and sets from iconic shows and movies like Friends and Harry Potter, and test your movie buff trivia.

Whether you have youngsters or are just young at heart, mouse ears are always magical. Whether you’re a Disney virgin or have been to the theme parks 1000x, with new attractions opening all the time, it never gets old. Currently, the Star Wars: Galaxy’s Edge exhibit is one of the biggest draws with thrilling interactive rides like Millennium Falcon, themed foods and drinks (green or blue milk), and customized merch (DIY droids and lightsabers). Even if you haven’t seen the movies (guilty), the technology and details are worth marveling over.

See the Muscle Men and Canals

The Venice Beach Boardwalk is one of LA’s most famous promenades for people watching and pristine sands. It’s one of the best venues for waterfront dining and to catch street performers putting on a show. You’ll see everything from drum circles to breakdancing, but head to Muscle Beach for the real eye candy as the bodybuilders love to show off their guns and stamina. For a romantic treat, you can walk the canals or opt for a gondola ride which were modeled after Venice, Italy.

Pro Tip: It can be difficult to find reliable and current information on things to do in various destinations. CheapOair will be producing a new video series each month highlighting little-known facts and under-the-radar attractions in major cities. Check out their LA recommendations here and subscribe to the YouTube channel to stay inspired and possibly even participate in future stories. 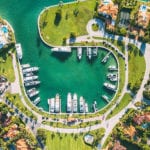